MY INTERVIEW WITH B. LYNN GOODWIN, "HOOKED ON WONDERFUL BOOKS"

An interview with Sheryl J. Bize-Boutte by B. Lynn Goodwin

“I was a writer at 12 years old when my parents bought me a Smith Corona typewriter and I wrote my first story.”   ~~Sheryl J. Bize-Boutte

BETRAYAL ON THE BAYOU

Written by Sheryl J. Bize-Boutte and Reviewed by B. Lynn Goodwin

Let It All Out

Sheryl J. Bize-Boutte’s Betrayal on the Bayou is a fascinating novel that delves into some heartbreaking issues around race, justice, and the noir code in the fictitious Louisiana town of Tassin.

In the midst of the Louisiana Bayou in the 1800s, there was a three-tiered culture: slaves, free people of color, and whites. When a young, white widower from Paris arrives with his daughter he marries a Tassin woman, who has money and power,  and then takes a Creole lover. After a while he builds his lover, Margot, a house identical to his wife, Marie’s, and sets them side by side. He encourages feuds, discord, and his personal superiority. As the story unfolds we learn about the injustices a white man could perpetrate without consequences in the 1800s. Readers will be left wondering how much has changed today in this fast-paced debut novel.

Bize-Boutte is an award-winning writer, poet, and Pushcart Nominee.

In this interview she talks about her experiences.

BLG: Tell us when you knew you were a writer. Who encouraged you to tell your stories?

SJBB: I am from a family of storytellers and voracious readers, so writing was a natural addition to that portfolio.  I knew I was a writer at 12 years old when my parents bought me a Smith Corona typewriter and I wrote my first story.  I had imagined stories before then and wrote a few things down in pencil, but my passion was not solidified and off to the races until I was gifted that typewriter.  Incidentally, my first story was about pencils.

BLG:  Are there real experiences you’ve observed or heard about woven into your novel? Can you give us a couple of examples?

SJBB: As you know, fiction is always informed by lived reality and for Betrayal on the Bayou that is an embedded fact.  I tell people my imagination has always been my best friend and so, the combination and sometimes hybrid presentation of fact and imagination are present in the novel.

As an example, one of the lead characters, Margot, is a mixture of the personalities, essences, physical attributes, occupations, and unfathomable heartbreak of several of the most important women in my life, the women who shaped me. In Margot, people who know me will see my mother who never completely overcame her tragedies and yet was a woman of incomparable substance and will, my aunt who made clothing, from the hats to the shoes, for Hollywood’s famous, my great-aunt who flourished in the Jim Crow south despite the restrictions on her very being, and me, a Black woman in America, and all that means. Those who don’t will discover my truths in this work of fiction.

Another example is the phrase, “the rain she come, the bisic pass on you,” from a story my father told us as children.  I took that phrase and re-imagined it as connected to my novel and gave it a new and different life with a more expansive meaning within the Creole and code noir culture I was describing and a commentary on how a myriad of things may have been in the fictional Louisiana town I built. In other words, I did what I do when I write fiction. I took a speck of something, added a dose of imagination, and blew it up into a story all its own.

BLG: I’ve been fascinated by Creoles since I found a reference to them in a poem in my 7th grade reader. What inspired you to write about Creoles and their struggles in Louisiana?

SJBB: My father was a Creole from Louisiana. I did not want to write a biography; I have already done many published stories and articles on my parents.  Yet, I was compelled to write something about the Creoles and one day, after ten years of procrastination, all the stories I had been told over the years, all the summer visits, all the food and the joy, and the deceptions, came together with imagination and boom, it was all just there, fully formed, the words hitting the pages like magic.

But the book is not just about the Creoles. Far from it. There are many human and structural characters woven into the novel. In addition to the people in the story, I explore aspects of colorism, elitism, gender bias, inequality, sexism, and what I consider other “betrayals” in the world I created inspired by a culture with which I am familiar.  I put it all in.  I let it all out.

BLG: Which characters and events were hardest to write about? Why?

SJBB: The hardest was Margot’s heartbreak.  It is a horrifying cruelty born of racial hatred.  It was the scene that took me 10 years to be able to write.  It was extremely difficult and written through a torrent of tears. Once I knew I could write the passage, I knew the rest of the book would just fall out.  And it did.

Another difficult character was Marie.  Her torment was inspired by the life of a close relative, who floated on the surface to avoid destruction.

BLG: How did writing poetry influence your process?

SJBB: My penchant for the poetic often results in uniquely formed prose in my story writing.  In poetry, I believe that every line is a poem, and my stories are heavily influenced by that. It also means that in my story writing, I do not always adhere to traditional grammatical and phraseology conventions, which can be misunderstood or unaccepted by some and cause “editors” to pull out the red pen and provide “corrections.”  But it is my voice, and I will always be true to it. Because the ultimate gift to me as a writer is reaching those who can “see” my writing.

BLG: I admire your confidence. Has teaching improved your writing? How?

SJBB: I don’t think teaching has improved my writing, but I do feel strongly that sharing what I have learned with others is a part of the circle of writing.  By that I mean, I am comfortable with the way I express myself with words and I teach to help others feel the same and to share what I know, what I have learned and what I am still discovering.

BLG: What do you hope readers will take from  Betrayal on the Bayou?

SJBB: That there are many stories of people, particularly Black people, that some may not know.  That we are complex beings.  That colorism and racism are cruel and not always visible. That just because you don’t know about something, doesn’t mean it did not happen.  That things that went on, pairings that occurred, are not new things, but existed long ago in different and sometimes, the same, settings. That there are some very bad people in this world.  That there are angels. That we must save and nourish the angels among us.

BLG: Was it always your intention to publish the book independently or did you submit to agents first? What advice can you give readers about independent publishing?

SJBB: When an unplanned opportunity arose to “pitch” the story to a traditional publisher, I took advantage of it, but I knew there was no interest when their eyes glazed over and they said, “Well it sounds like a story worth telling.” Since I had always wanted to publish on my own to protect my “voice,” I took that route, and I am happy that I did.  I feel I told the story I wanted to tell in the ways that I wanted to tell it, without interference or lack of understanding by an outside party.

My advice for independent publishing is twofold:

Make sure you carve out adequate time to market your work. People need to see you and your writing in as many venues as you can reach.

Invest in a good editor. I thought I had, but unfortunately, I had not.  The bad thing is copies got out with mostly punctuation errors.  The good thing is, since my independently published book is print on demand, I was able to get the mistakes corrected and have the book re-posted.  But I also have to say that some of the strongest and best reviews I received were on the early uncorrected copies, proving that for some, even the worst editing job can’t get in the way of a solid story.  Even now, I suspect we did not catch all the errors, but neither did Ernest Hemingway, Walter Mosley, or Sue Grafton, and many other famous, best-selling authors.

I consider myself to be in good company and am happy about the response to my book.

BLG: What are you working on now and where can people learn more about you?

SJBB: In a bit of a departure from Betrayal on the Bayou, which is, at times, dystopian, I am in the process of writing a sci-fi novel. The first chapter won an award in the 2021 San Francisco Writers Conference Writing Contest and is published in their 2021 anthology.

You can read more about me and what I am up to at: www.sheryljbize-boutte.com. Thank you again for this interview opportunity.

BLG: Thanks for taking the time to answer these questions. I agree that your voice comes through loudly and clearly. You’ve done a great job of sharing a part of the culture that many people would like to know more about.

Looking for a book that is both historical and timely?

Looking for a fast-moving story that will grab and hold you?

Get a copy of Sheryl J. Bize-Boutte’s Betrayal on the Bayou. 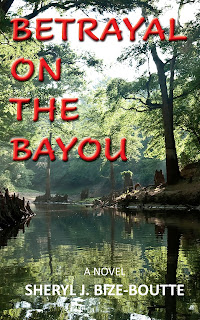