As we pause to remember the Oakland Firestorm of 1991, I am sharing a piece written by my then 15-year old daughter, Angela.  We were all feeling stunned, saddened and shocked on that day and the days that followed.  For us, Angela captured those feelings best.........

HAPPY BIRTHDAY MOMMY! THIS ONE IS FOR YOU.

WE DON’T KNOW JACKS
You don’t know jacks unless you played with my mother, Emma.  With her unrivaled dexterity and grace, she was the champion of the ball and stars.
Wherever we lived, the kitchen served three purposes; a place to cook and eat, a gathering room for friends and family and a stadium for playing jacks.  The floors were always linoleum; a perfect platform for the game.  The hazards were the undersides of the refrigerator and stove, where the ball would often travel if you were not on your game.
Red, blue and green, we played jacks until the colors wore off the metal stars and the little red ball had lost its bounce.  Whoosh! was the sound of my mother’s long fingers and fingernails as they effortlessly scraped the floor to pick up the jacks and catch the ball in one seamless motion.
Onesees, twosees, sixees.  Single, double, triple bounce.  She rarely missed.  When our turn came, we tried to emulate her technique, but we were never quite as good.  She could place them in a pile and pick them up one by one or three by three without touching the others.  She would laugh and softly chastise us if we threw the jacks in too wide a pattern; a trick to make sure we did not touch the jacks as we tried to even the score or (in our dreams) win the game.
I recently bought myself a set of jacks.  It came with a green ball (an abomination) and eight silver metal jacks.  Sadly, the package also included instructions on how to play, but only with one bounce of the ball.  No double or triple bounce.  No twosees or thresees.
Proof again that we don’t know jacks.
Sheryl J. Bize Boutte
August 2010
Posted by SHERYL J. BIZE-BOUTTE at 9:48 AM No comments:

A TEAR OR A SMILE

A TEAR OR A SMILE
While you walk in life
And make your choices
On how you treat the ones you love
Be gracious, loving and kind
For you never know
How you may affect
Thoughts of you in their mind
When you awake
In the middle of the night
From a dream in which they reside
If you have treated them well
You can hold them close
Not with a tear
But with a smile
It is never too late
To change the feelings
You have for them or they for you
You have the power
To forgive and forget
And to start with love anew
When they are far away
And you miss them so
Love will traverse the miles
And they will think of you
For all of their days
Not with a tear
But with a smile
Copyright@2010 Sheryl J. Bize Boutte
Posted by SHERYL J. BIZE-BOUTTE at 1:56 PM No comments:

AN APPLE A DAY

AN APPLE A DAY
Sheryl J. Bize Boutte
July 20, 2011
In May 2010, I posted a blog entry entitled “The Real Cost of Living As a Federal Retiree.” In that post I expressed my disappointment with the fact that there would be no 2010 Cost Of Living Adjustment (COLA) for annuitants. Little did I know at the time that we would not get a 2011 adjustment either, or that our health premiums would increase by as much as 7%. But my central concern in that post was how the COLA’s are currently calculated by using the Consumer Price Index (CPI):
“The CPI uses prices from urban and clerical populations that make up 87% of the U. S. The CPI includes price information from the cost of food and beverages, housing, education and communication, medical care (but apparently not medical insurance premium cost), and recreation. According to the Bureau of Labor Statistics, each month their workers call representatives from these areas who are located in doctor’s offices, retail stores and various service establishments.”
The voices of those who are against the use of the CPI for determining COLA increases have grown much louder since I wrote that post. But what I was not prepared for was the proposed CPI replacement, which would make things even worse for retirees.
The proposed process for changing the way COLA’s are set for retirees would include a new method for determining the CPI. Currently the CPI is based on the costs outlined above and according to the “experts” does not take into account “upper level substitution bias.” This term refers to the belief that if consumers cannot afford something when the price goes up, they simply change their buying habits. While this may indeed be the case, the more troubling aspect of this principle is captured in the example provided by the Federal Times, “…if the price of apples goes up, people are likely to buy fewer apples or switch to a cheaper fruit.” And so, when you include this “upper level substitution bias” it means that the CPI has been overstating the amount of inflation and the COLAS should be smaller!
But it’s the underlying dogma that provides the foundation for this way of thinking that is so troublesome. It says if retirees could buy apples before the change and can’t buy apples under the new process, so what? It appears that those who are floating this proposal, have little or no concern that retirees may have to buy a cheaper fruit or no apples at all. This way of thinking about and treating retirees in this country is unconscionable. It says that debt reduction can be solved in part, by a doctrine of denial. In other words, if you are a retiree, you can’t have that….you can only have this. Under this doctrine, retirees will see their annuities buy less and less while trying to make decisions about whether or not to splurge on that red delicious.
This new philosophy, if allowed to take hold, will continue the step-by-step default on the promise of retirement made to those who served this country. The apples are not just fruit; they are a metaphor for our entire hierarchy of needs. The uncontrolled rise in costs combined with the continued erosion of annuities is not sustainable.
And, as unbelievable as it is that I feel I must say this, say this I will: We have earned the right to an apple a day.
Posted by SHERYL J. BIZE-BOUTTE at 4:04 PM No comments:

I have been here for thousands of years, and I am still an average 33 years young. Although some say she was just a fantasy, my mother was the ancient African Queen, Califia, ruler of the Island of California. From my flat belly to the gradual rise of my rolling hills, I remain beautiful and nurturing.

From 1200 B.C., my inherited landscape was home to the Ohlone Indians who for 30 centuries lived nearest my lakes and streams and had no word for war.

When the Spaniards came, they named me Rancho San Antonio. My fertile flatlands supported the agriculture looked over by the groves of oak and redwood lining my slopes.

I became the western center for the Transcontinental Railroad. I am the home of the first telephone booth, the first airmail delivery, and the oldest wildlife sanctuary in the United States.

When the earth fractured under my sister across our shared bay waters, 150,000 of her children sought refuge with me; 65,000 of them never left.

I was once known as the “Detroit of the West”; producing 100 Chevy’s a day. Some believe my Fairyland was the inspiration for Disneyland.

I am the origin of the “West Coast Blues”, the Mai Tai cocktail and Rocky Road Ice Cream. One of my sons invented the Popsicle and one of my daughters was lost to me when she took her famous solo flight from my airport. A man who usually prefers purple once bought another of my daughters a turquoise Mercedes.

Whether they were born to me, or came to live in my house, I am proud of my children. They have made me one of the most ethnically diverse places in the country. They have persevered and continue to excel. They have become leaders, architects, musicians, healers, athletes, artists, actors, inventors, and collectively speak more than 150 languages. Among them: Julia Morgan, Bernard Maybeck, Tom Hanks, Mark Curry, Bruce Lee, Dennis Eckersley, Rickey Henderson, Tony Lema, Andre Ward, MC Hammer, Digital Underground, Goapole, En Vogue, Pete Esovedo, Jerry Brown, Marcus Foster, Kamala Harris, Barbara Lee, and Mother Wright.

My wish for my children is that they know me in full. That they respect and revere me. That they defend me to those who filter my name through an unkind mouth. That they take care of each other. That they embrace all I have to share. That they know that no matter what path they take, I will always be here for them and will welcome them home,

To a Mother’s love.

Posted by SHERYL J. BIZE-BOUTTE at 5:05 PM No comments: 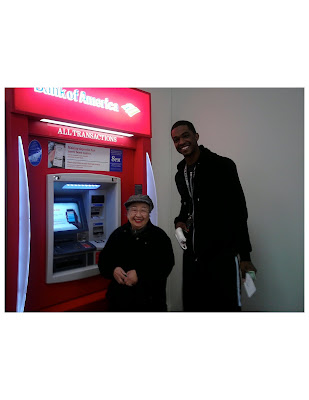 Ran into these two at the bank the other day. They were having a conversation about, what else, basketball. He was telling her how he had hurt his fingers during a basketball game. She was telling him stories about her playing time in school as a point guard.
Posted by SHERYL J. BIZE-BOUTTE at 1:34 PM No comments: