THE DUCK AND ME

THE DUCK AND ME
WAITING TO READ "THE GIRL OF THE SUNFLOWER"
AT THE OCTOPUS LITERARY SALON (WITH AUTHOR GINI GROSSENBACHER)
JUNE 20, 2019 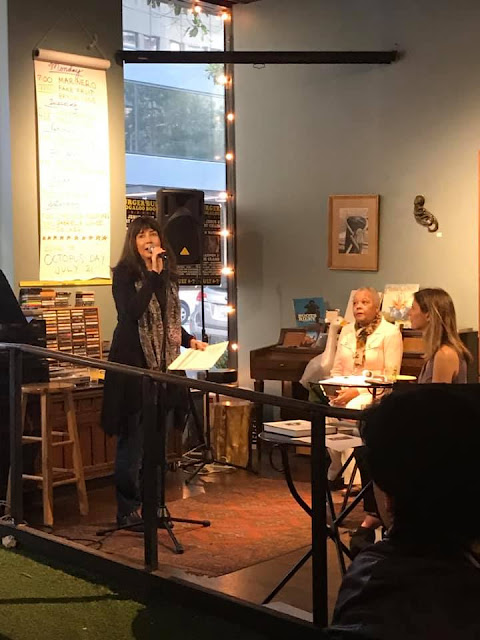 Seated: Cristina Deptula of Authors Large and Small
Posted by SHERYL J. BIZE-BOUTTE at 10:23 AM No comments:

PLEASE JOIN US ON

FOR A PARTNERED READING
AT THE OCTOPUS LITERARY SALON

"GIRL OF THE SUNFLOWER"


See my Author Page at
www.amazon.com/author/sheryljbizeboutte

Posted by SHERYL J. BIZE-BOUTTE at 3:09 PM No comments:

What are the secrets to success for novels? At least one of them is structure and our esteemed WNBA-SF member authors will share the approaches that have garnered them bestseller status, awards and rave reviews. Learn what role planning and research play and how to make your scenes, settings, and characters realistic and compulsively readable from beginning to end. The Women’s National Book Association’s San Francisco Chapter is thrilled to present three examplar writers for in-depth explanations of the strategies that inform their craft.
A Novel Plan will be moderated by WNBA-SF President Brenda Knight. There will be Q&A followed by book signings; bring your notebooks and plenty of questions!

Sheryl J. Bize-Boutte is an Oakland multidisciplinary writer whose works artfully succeed in getting across deeper meanings about life and the politics of race and economics without breaking out of the narrative, with Oakland often serving as the backdrop for her touching and often hilarious works. Her first book, A Dollar Five-Stories From A Baby Boomer’s Ongoing Journey (2014) has been described as “ rich in vivid imagery”, and “incredible.” Her second book, All That and More’s Wedding (2016), a collection of fictional mystery/crime short stories, is praised as “imaginative with colorful and likeable characters that draw you in to each story and leave you wanting more.”  Her latest book, Running for the 2:10 (2017), a follow-on to A Dollar Five, delves deeper into her coming of age in Oakland and the embedded issues of race and skin color with one reviewer calling it “… a great contribution to literature.” Her fictional story, “Uncle Martin” will be published by Medusa’s Laugh Press Summer 2019. She currently has a novel in progress titled “Betrayal on the Bayou,” slated for publication in early 2020. She is also a contributor to award winning author Kate Farrell’s upcoming book “Story Power,” an anthology on how writers build and create their stories.

Mary Mackey is the New York Times bestselling author of fourteen novels, including The Earthsong Series—four novels which describe how the peaceful Goddess-worshiping people of Prehistoric Europe fought off patriarchal nomad invaders (The Village of Bones, The Year The Horses Came, The Horses at the Gate, and The Fires of Spring ). Mary’s novels have been praised by Marion Zimmer Bradley, Pat Conroy, Thomas Moore, Marija Gimbutas, Maxine Hong Kingston, Marge Piercy, and Theodore Roszak for their historical accuracy, inventiveness, literary grace, vividness, and storytelling magic. They have made The New York Times and San Francisco Chronicle Bestseller Lists, been translated into twelve foreign languages and sold over a million and a half copies. Mary has also written seven collections of poetry including Sugar Zone, winner of the 2012 PEN Oakland Josephine Miles Award. This September Marsh Hawk Press will publish a collection of her new and selected poems entitled The Jaguars That Prowl Our Dreams. At marymackey.com , you can get the latest news about Mary’s books and public appearances, sample her work, sign up for her newsletter, and get writing advice. You can also find her on Facebook and follow her on Twitter @MMackeyAuthor.

Joan Gelfand’s reviews, stories and poetry have appeared in over 100 national and international literary journals and magazines including Rattle, Prairie Schooner, Kalliope, California Quarterly, the Toronto Review, Marsh Hawk Review and Levure Litteraire. Joan has been a featured reader at numerous venues in the United States and Mexico  including Bowery Poetry Club, the Southern Festival of Books, The Public Library of New York, and Litquake. Development Chair of the Women’s National Book Association, a member of the National Book Critics Circle and a juror for the Northern California Book Awards, Joan blogs for the Huffington Post and coaches writers. She lives in San Francisco with her husband, Adam Hertz and two beatnik kitties – Jack Kerouac and Lawrence Ferlinghetti.