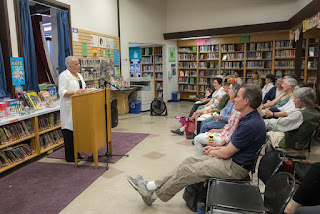 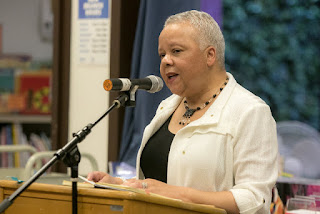 Posted by SHERYL J. BIZE-BOUTTE at 4:22 PM No comments:

3 pm: Poetry readings for about 90 minutes, and celebration with noshes and beverages afterward to 6 pm.
Celebrate National Poetry Month with the Women’s National Book Association Bay Area chapter in the heart of North Beach with some of the finest female writers around. Wild Women Poets will gather at the landmark venue, The Beat Museum in San Francisco.  Grab your bongos and wear your beret to what will be one of literary events of the year! This will also be a mixer with food, sparkling beverages and wine. Bring a friend and be ready for an evening filled with poetry, song, wine and a love of literature.

Moderator: Brenda Knight, author of Women of the Beat Generation, will read new work and a tribute to “Beat Goddess” ruth weiss. Brenda began her publishing career at HarperCollins. An author of ten books, she won the American Book Award for “Women of the Beat Generation.”  In 2015, she was named Indiefab Publisher of the Year. She is Editorial Director at Mango Publishing and is President of WNBA-SF Chapter.

Claire Scott is an award winning poet who has received multiple Pushcart Prize nominations. Her work has been accepted by the Atlanta Review, Bellevue Literary Review, New Ohio Review, Enizagam and Healing Muse among others. Claire is the author of Waiting to be Called and Until I Couldn’t. She is the co-author of Unfolding in Light: A Sisters’ Journey in Photography and Poetry.

Diane Frank is an award-winning poet and author of seven books of poems including Canon of Bears and Ponderosa Pines. Blackberries in the Dream House, her first novel won the Chelson Award  for Fiction and was nominated for the Pulitzer Prize, Diane lives in San Francisco where she dances, plays cello and create her life as an art form. She teaches Poetry, Fiction and Memoir workshops at San Francisco State University and Dominican University.

Sheryl J. Bize-Boutte is an Oakland writer of prose and poetry, having written three books and a contributor to several anthologies. Her latest book, Running For The 2:10, delves deeper into her coming of age in the Bay Area and reviewed as  “A great contribution to literature.”

Kate Farrell founded the Word Weaving Storytelling Project, in collaboration with the California State Department of Education funded by grants from Zellerbach Family Fund, San Francisco, to train educators at all levels, and published numerous educational materials.  Farrell edited the anthology, Wisdom Has a Voice: Every Daughter’s Memories of Mother  She is co-editor of the anthology, Times They Were A-Changing: Women Remember the ’60s & 70s, 2013—Finalist for Foreword Reviews 2014 Book of the Year Award and 2014 Indie Excellence Award. Farrell is co-editor for the anthology, Cry of the Nightbird: Writers Against Domestic Violence, 2014–Finalist for the 2015 Next Generation Indie Book Award and the 2015 Indie Excellence Award.

Dr. Jeanne Powell received degrees from WSU in Detroit and USF in San Francisco. She writes and performs poetry, flash fiction, nonfiction and short plays. Much of her work has been published. Since 1996, her small press has published 20 poets. She teaches English, writing and social studies to youth and adults. Her cultural and film reviews appear at wattpad.com [worddoctor], starkinsider.com, and sidewalkstv.com. Regent Press published CAROUSEL.

Beatrice Bowles in her own words:
I tell stories about secrets that nature keeps.
A spy in Spider Grandmother’s tattered web,
I weave words into gardens and rust into silk.
Posted by SHERYL J. BIZE-BOUTTE at 2:55 PM No comments:

Come celebrate National Poetry Month with us!
Six local poets will be reading their poetry, followed by a short open-mic period.

Posted by SHERYL J. BIZE-BOUTTE at 4:39 PM No comments: