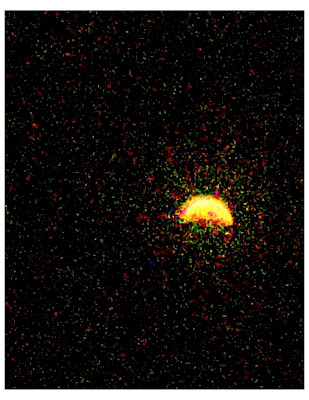 Posted by SHERYL J. BIZE-BOUTTE at 7:32 PM No comments:

Email ThisBlogThis!Share to TwitterShare to FacebookShare to Pinterest
Labels: earth and moon embrace

Since when is it ok to cry at work? It seems that one of the mainstays of workplace behavior has been turned on its head with the election of crybaby John Boehner as the new speaker of the House of Representatives.

As a woman who worked her way up the ladder in the federal sector, the cardinal rules I was given for each step were to be professional, knowledgeable, and no matter what happens, don’t ever let them see you cry at work. So why is it that all of a sudden, a man can turn on the water works at the drop of a dime and it is considered acceptable? John Boehner’s unpredictable crying jags make pre menstrual syndrome look like a walk in the park.

As I watched this man boo hoo his way through his recent 60 Minutes interview, I did not think he looked like the portrait of a sensitive man; I thought he looked unstable. I mean after all, he started wailing at the mention of “little kids.” It could be that the thought of children evoked melancholy memories for him, and I could accept that, if it weren’t for the fact that it is now being revealed that he cries all the time and has been doing so for many years. And it has been ok. His career has not suffered from it.

Can you see it? There is a debate in Congress about water conservation and in the middle of a speech John starts crying uncontrollably. Asked why he is crying he says,” I was just thinking about all of the water I drank when I was little and it just makes me…makes me…ooooooohhhhh… I should have gone swimming more…I just get all choked up about it….waaaaaaaaa!” Comedians, YouTube and bloggers are going to have a field day with this guy. Think about it. God forbid…this man is third in line for the presidency!

I know if I had cried like that during my career, I would have been labeled at the very least an overly sensitive female or at the worst a hysterical woman not suitable for management.

Several years ago I attended a coworker’s funeral. If there was ever a time to cry, this was one and I did. The person who had died was young with a young family, and had been taken suddenly. He was well liked and at the funeral emotions ran high. My boss was sitting next to me at the service with tears running down his face. When I offered him a Kleenex, I was sternly rebuffed with a look that said, I am not crying. Do I look like I’m crying? Why are you crying? We are management! So strong was the taboo against male tears or tears of any kind in the workplace, he could not even let loose at a funeral or let me off the hook for doing so.

I think crying is natural. I think some of us do not cry enough and hold in too much. Crying can be cleansing. Crying is the ultimate expression of grief as well as joy. The problem with John Boehner is you can’t tell which emotion he is feeling when he starts to sob. He just looks like he has lost it.

There is something very unnatural about John Boehner’s seemingly unprovoked auto-crying. I am worried about how those tears will manifest themselves in the future and what it will mean for all of us.

I hope he does not read this. I don’t want to make him cry.

Posted by SHERYL J. BIZE-BOUTTE at 5:43 PM No comments: