LIFE IN THE FRONT ROW: A NEW YEAR'S WISH FOR YOU

Life in the Front Row

My family and I stopped buying Christmas presents for each other many years ago.  Instead we give part of the money we were spending on mostly stupid stuff to organizations we support, and use the rest to treat ourselves to a concert or other venue during the holidays.  This year, we splurged on front row seats to Cirque Du Soliel’s “Volta.”

We started our holiday tradition with Cirque’s shows with “Quidam” in 1996, which starred a Hayward, Ca local.  It has always been a great treat to be in that front row, to be so close to the performers; close enough to see the joy on their faces as they perform impossible feats along with the seamless teamwork and magnificent talent from all over the world that makes the evening so magical. The shows may differ in act, plot and story, but the consistent theme is the wide-eyed “oohing and ahhing” we audience members do at everything.

This year, we were again in the front row smiling, laughing and clapping at the unicyclist and his partner who were doing crazy acrobatics while they circled the stage at breakneck speed.  And then it happened.  Just as they hit the curve in front of us, the cyclist lost control sending the unicycle flying right at our heads.  Fortunately, our daughter was quick enough to catch it, and as the audience of thousands let out a collective sigh, she calmly rose from her seat and placed it back onto the stage.  As the act resumed, we were all assured that no one had been hurt and the only casualty was a glass of spilled red wine.

Of course, I am thinking what does this all mean?  Well, I decided that it was a good example of living life in the “front row.”  It is where you see things up close, where you can reach out and touch and in some cases, be touched, and where you can feel.  Sure, the front row has its risks but it also has the most vivid and memorable rewards.  It can cripple you with sadness and bring you back to immeasurable joy. You can’t always be prepared for it and have to take it as it comes, but that’s how life is.  It is the raw and the real.  It is the place where the wine gets spilled and everybody ends up just fine.

So be it physical, metaphorical, spiritual or virtual, I hope you go there as often as you can. I hope you smile and clap and stomp your feet.  I wish you the joys and excitements of life in your “front row” for the New Year and always.

Posted by SHERYL J. BIZE-BOUTTE at 4:38 PM No comments:

" RUNNING FOR THE 2:10" LISTED BY AMERICAN BOOK FEST

RUNNING FOR THE 2:10
LISTED BY AMERICAN BOOK FEST 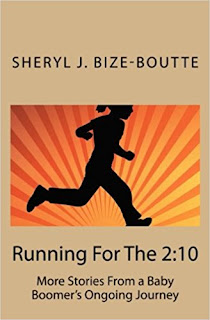 Sunday, December 16
4:00 PM-6:00 PM
Book Passage Corte Madera
51 Tamal Vista Blvd, Corte Madera 94925
FREE and Open to the Public
Light refreshments and wine tasting, books available for sale and book signing.
Please join us for a celebration of 50 years of women in the world of books with member authors of the San Francisco Chapter of the WNBA.
Before women had the right to vote, the Women’s National Book Association was advocating for women writers, booksellers, editors and “women in the world of books,” starting in 1917. This vital part of the Northern California publishing community includes New York Times bestselling authors, writing coaches, award-winning editors, literary agents, National Book Critics, book to film creatives, librarians, and an Indiefab Publisher of the Year, offering insider secrets to getting your book published.
In this 50th year Showcase, authors from the WNBA-SF will read from their books and join in a panel discussion of how women’s voices and those of diversity are more important than ever before. Q&A to follow.
Current List of Participating WNBA-SF Chapter Member Authors:
Sheryl Bize-Boutte, Running for the 2:10
Megan Clancy, The Burden of a Daughter; A Novel
Kim Collins, F is For Feminist
Elise Marie Collins, Super Agers
Lynn Dow, Nightingale Tales: Stories from My Life as a Nurse
Diane Frank, Letters from a Sacred Mountain Place
B. Lynn Goodwin, Never Too Late, From Wannabe to Wife at 62
Joan Gelfand, You Can Be A Winning Writer
Brenda Knight, The Grateful Table
Mary Mackey, The Jaguars That Prowl Our Dreams: New and Selected Poems 1974 to 2018
Sharon McElhone, Basta: Anthology Dedicated to Helping Immigrant Women
Duncan McVean, My Patients Like Treats: Tales from a House Call Veterinarian
Gina L. Mulligan, From Across the Room
Barbara Ridley, When It’s Over
Marcia Rosen, The Senior Sleuths: Dead in Bed
Rebecca Rosenberg, The Secret Life of Mrs. London
Jan Schmuckler, Role Montage
Bev Scott, Sarah’s Secret: A Western Tale of Betrayal and Forgiveness
Michelle Travis, My Mom Has Two Jobs
Sue Wilhite, 21 Templates that Run Your World
Posted by SHERYL J. BIZE-BOUTTE at 3:59 PM No comments:

Literary gathering and reading! Includes open mic!
Presented by
Cristina Deptula's "Authors Large and Small"
October 14, 2018
2:00 pm
Au Coquelet Cafe Restaurant
2000 University Avenue
Berkeley, CA 94704
Our lineup will include Oakland's own Sheryl Bize-Boutte, MC at the Montclair Library's National Poetry Month celebration, whose stories celebrate our history and our hometown amid change and gentrification, and Henry Hitz, whose novel White Knight gives a unique look at the Jonestown killings and murders of supervisors Milk and Moscone through the eyes of a mentally unstable person who believes he has caused and must rectify the tragedies.

Also former Berkeley resident and Beat writer/social activist PW Covington, whose poetry comes from the hard lessons and adventures of the road, not the classroom. He performed together with Sheryl last month at Bay Area Generations, which brought out 100+ people. Also from Berkeley will be Connie Tyler, creator of the fun, humane and compassionate Earth Woman Tree Woman fantasy quartet, an adventure in which humans learn to join the dance of life. Connie is active within dance and movement circles in Oakland/Berkeley and has a following here. And Mary Parks, author of They Called Me Bunny and Flight to Ohio: From Slavery to Passing to Freedom, tautly crafted historical fiction exploring the tensions between claiming and overcoming racialized identities (Black and Native American) in early American history.
Also, Christopher Bernard, editor of San Francisco's Caveat Lector magazine and author of poetry collection Chien Lunatique,who has previously read at East Bay Booksellers and sparked a lively discussion, and Richmond's Christine Volker, whose sensuous murder mystery Venetian Blood won the Sarton Prize for Women's Fiction for 2018.
We may invite other authors to share as they let us know that they are available, and hope to have space for an open mic should time allow.
Posted by SHERYL J. BIZE-BOUTTE at 2:35 PM No comments:

POET'S PROGRESS REVIEWS "RUNNING FOR THE 2:10"